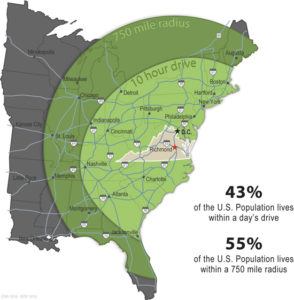 NAI Dominion specialties in the Central and Southeast regions of Virginia. The dynamic and diverse area ranges from centralized Richmond area of Virginia to the Atlantic Ocean and Chesapeake Bay areas of the Hampton Roads Region. It is known for its excellent location central in the East Coast of the United States. Top rank business climate and unmatched quality of life. Companies are drawn to the area by the favorable tax rates, transportation systems, and market accessibility. We are proud to call Virginia home with offices in Richmond, Virginia and Chesapeake, Virginia.

Virginia’s central location on the U.S. East Coast provides an ideal advantage. Businesses benefit from their proximity to major business, financial, and governmental hubs, and availability to global markets.

Virginia offers a robust telecommunications network with more than 122 broadband providers. It is one of the most connected states in the country. More than 94% of Virginians have access to wireline service, with 81% having access to wired broadband of at least 100mbps, and 99% have access to mobile broadband service.

Virginia is one of the most connected states in the nation with access to a robust fiber network that matches or exceeds virtually every domestic market and most major financial centers around the world. The Commonwealth hosts prominent commercial internet exchange points, and 70 percent of the world’s internet traffic passes through the Metropolitan Area Exchange East located in Ashburn, Virginia.

The Richmond area has been connected to Ashburn with “dark fiber” opening opportunities along the I-95 corridor. In Southern and Southwest Virginia, the benefits of a 1,500+ mile advanced fiber-optic broadband network connects more than 100 certified GigaParks.
Microsoft and Facebook announced plans in 2016 to build “MAREA”—a new, state of the art subsea cable connecting Bilbao, Spain to Virginia Beach. This will be the highest-capacity subsea cable to cross the Atlantic with an estimated design capacity of 160 terrabits per second. Telefonica also announced plans to connect Rio de Janeiro and Fortaleza, Brazil to Virginia Beach with the BRUSA ultrafast submarine cable. This connection will increase the availability of ultrahigh-speed broadband services between the U.S. and South America. Both projects should be completed by the end of 2018.

Virginia also has the infrastructure to support multinational business, as evidenced by $16.4 billion in Virginia exports in 2016. There are six foreign trade zones designed to encourage business to participate in international trade.