When you think about it, it makes sense to turn restaurants into CoWorking spaces. The CoWorking model emerged after 2008 when the economy was in freefall and unemployment was in the double digits in many places. Coffee shops became the place to network, start a business, do freelance and contract work – anything to make money when there were no jobs. 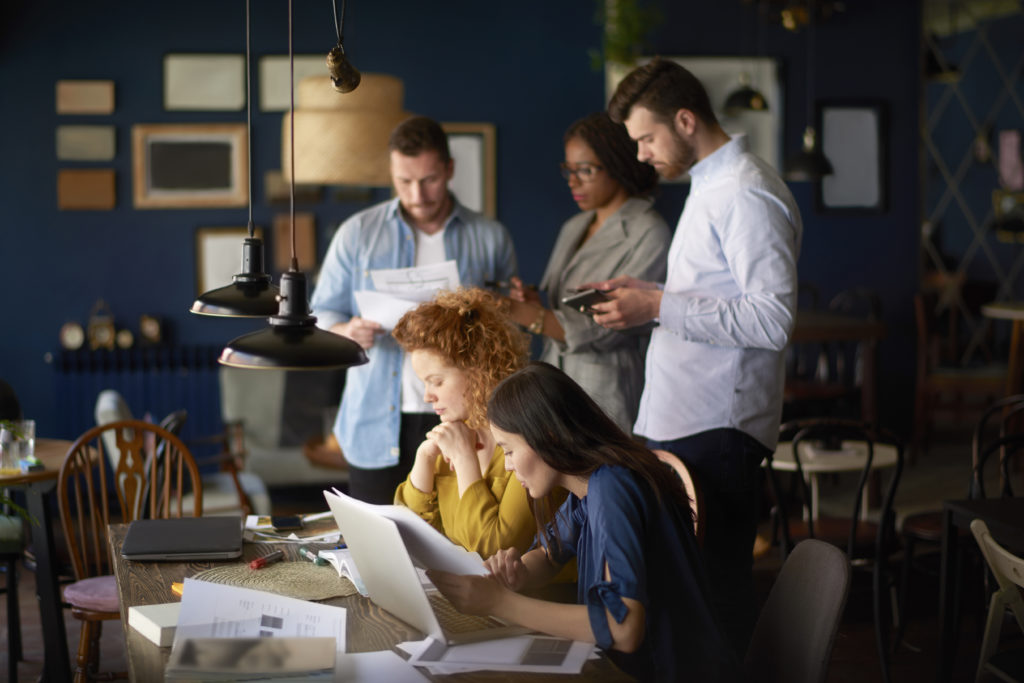 Multi-ethnic group of people working together on a project in cafeteria.

Those café entrepreneurs soon began launching businesses to great success. Many who left the traditional workforce have not – and likely will not – come back to the traditional office after finding success working independently. However, WeWork recognized that they also needed a place to work that was affordable and better than a coffee shop.

So WeWork began buying up office space and turning it into shared offices where different companies could lease parts of the building. These buildings though were not your standard cookie cutter cubed offices. WeWork began the work/play model that all companies are trying to replicate now.

Offices these days look more like campus hangouts with game rooms, relaxation rooms, TVs, restaurants, on-site cafes, and atypical seating arrangements for offices and desks. Then just a couple of years ago WEach Seats came up with a brilliant idea – use restaurants that are empty during the day as CoWorking spaces from 9 to 5. That idea is sprouting roots and spreading across the country.

Coffee shops are noisy and so are gyms. For much less than a membership at a CoWorking space, businesses are able to pay to use restaurants that only open for dinner all day until dinner time, to use their space for an office. That way the environment can be more controlled for noise levels with the added bonus of ambience with relaxing lighting and access to coffee and water.

Elite Café in New York is also testing the CoWorking restaurant trend. Starting at 8:30 am, the restaurant becomes a CoWorking space where the business owners are given the keys and tasked with opening the restaurant for work. Then the workers help the restaurant transition from day to night – some even help set up the tables for dinner!

Spacious is another New York based CoWorking restaurant that has a couple dozen offices in both New York and San Francisco with memberships as low as $99 per month. Bars and tables are used as desks. Private rooms are being used as conference rooms.

A Win-Win For CoWorkers and Restaurateurs

Of course, for some places, zoning will be an issue. Generally speaking, a restaurant has to be used as a restaurant but in New York, the city says it’s okay as long as the building is used primarily as a restaurant.

What businesses are noticing is how cost effective and low maintenance running a CoWorking restaurant can be. Plus there are added benefits like the possibility of interaction between coworkers as well as other businesses sharing the space.

Like running a restaurant, these spaces ask tenants questions like “how they like coffee, the milk options” and what their noise requirements are. One business decided to try this just because lunch hours were so slow. Now the business is thriving every day as a CoWorking restaurant.

Advertising is cheap. Leases provide an additional stream of income when the building would otherwise be sitting idle. This trend will likely continue to grow based on its current successes.