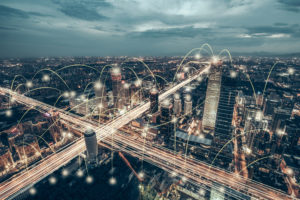 The Smart city market is projected to reach $400 billion by 2020. The type of data analysis that is made possible through Smart cities will become invaluable for identifying prospective investments, new or re-development, attracting tenants, and building better infrastructure.

One tech leader, Cisco, is pouring hundreds of millions of dollars into Smart city projects all over the world including in San Jose and Chicago. Electricity giant GE (General Electric) has joined with city governments in San Diego, CA and Jacksonville, FL to test pilot Smart cities there. Will this trend continue and what do these Smart city projects mean for our future?

Expect the Smart City Trend to Continue to Grow

Experts predict that Smart cities will become a nearly half a trillion dollar industry in less than two years. There are plans to unveil about 600 Smart cities globally over these next two years. In less than a decade Smart cities are estimated to account for 60% of the global GDP from these 600 cities alone.

Reasons Smart Cities are a Win-Win-Win

Our future is going to be vastly more tech enhanced than it is right now – amazing when you consider how tech enhanced everything already is. But what Smart cities are expected to do is go beyond providing more convenience to citizens and consumers. They are going to be more efficient, use less energy, and control everything from street lights to the city’s Smart electrical grid.

Imagine a bus stop that tells you when the next bus is coming in real-time and will re-route you automatically without you interacting at all. Your mobile device will announce it like the weather when you pass a bus stop’s beacons and sensors.

No longer will pedestrians have to stand and wait for five minutes to cross a busy street. Sensors will detect pedestrians and will change traffic lights in real-time for optimal traffic flow. Uber apps will send driverless cars when you step into an Uber pickup zone with your mobile device – all because of beacons and sensors in street lights, traffic lights, crosswalks, and city cameras.

What Smart Cities Mean for the Future of CRE

Predictive analysis today is child’s play compared to what we expect in the future. Imagine how much useful data will be collected when Smart cities are also filled with Smart buildings that can communicate with city assets as well as consumers, employees, and citizens.

When it comes to site planning, the types of real-time and historic data that can be collected based on actual foot traffic over long periods of time will be insanely invaluable in the future. Seattle is already a Smart city and is experimenting with and testing new ways of interacting with its citizens through Smart technology to make life better.

Mobile Devices Will Connect People, Buildings, and Cities Together

In the future, All CRE properties will have to be built to connect with both people and the city itself. Real-time data will be essential in site planning, development, investment, and leasing. Being able to connect to a wide range of devices and technologies that are continuing to evolve and change will be an ongoing challenge for everyone in CRE.